Has the Department of Environmental Affairs condoned canned lion hunting?

The Department of Environmental Affairs (DEA) appears to have given the green light to the controversial practice of canned lion trophy hunting and justified the legal export of lion bones.

Its recently released non-detrimental findings (NDF) assessment for African lions states: “The export of lion trophies is not detrimental to the survival of the species.”

An NDF is a science-based risk assessment that considers the vulnerability of a species in relation to how well it is managed. It is a legal requirement for the export of all Cites appendix I and II listed species – for example, for any lion hunt to legally take place and trophies and/or bones to be exported a non-detrimental finding has to be provided by the relevant country’s scientific authority.

The NDF states that South Africa has an estimated 7000 captive-bred lions kept in around 260 breeding or captive facilities. Nearly 90% of these lions are in the Free State and the North West, and are bred for trophy hunting, with the legal export of lion bones seen as a by-product.

This export quota of 800 lion skeletons appears to be based on the average lion bone trade over the past 10 years. In other words, the quota is determined purely on economic grounds rather than science-based and evidence-driven.

The conservation and animal welfare community are extremely worried about this, as it legitimises the canned lion hunting industry further, at a time when the world’s largest hunting club, in the US, has turned its back on this industry.

The captive-bred lion hunting industry in South Africa has grown significantly, to the point where almost twice the number of lion trophies are exported from South Africa as from all other African countries combined.

The NDF assessment concludes that “legal local and international trade (of lion trophies and bones) poses a low to moderate, but non-detrimental risk to the species in South Africa”. Before starting to celebrate, we need to understand some of the inadequacies of the NDF.

In the NDF assessment, the overall level of risk of harvesting for lions is expressed as a relationship between species vulnerability (its biology and status) and the management system to which the species is subjected.

The NDF puts the overall risk as marginally in the category of non-detrimental to trade. This means that the overall system need fail in only one or two areas to pose a detrimental and high risk to the species. 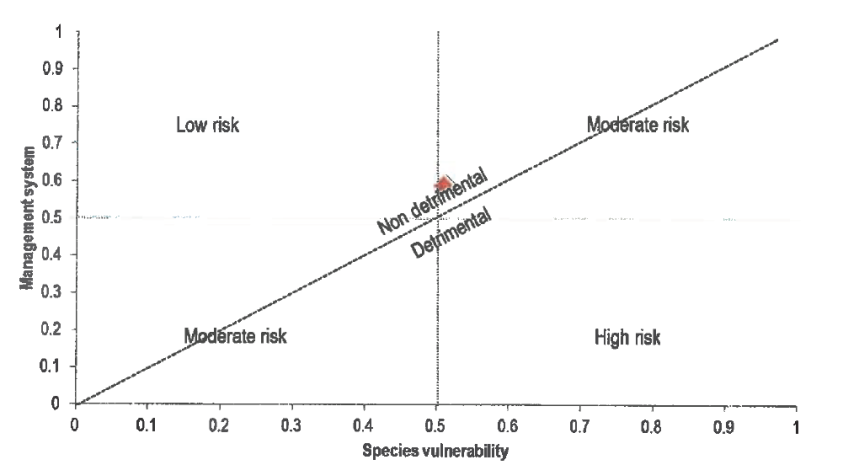 This is especially worrying considering the NDF points out several flaws in the existing management system, especially in terms of monitoring and record keeping.

In Section 19, it describes reporting errors with Cites trade database entries, discrepancies between reported exports and imports, differences in provincial ordinances or acts, as well as hunts that are rarely monitored by conservation officials for compliance with existing norms and standards owing to a lack of resources and capacity.

Furthermore, in the absence of centralised systems for setting quotas for harvest and the issuing of permits, the NDF recognises these as areas for caution too (sections 14 and 25).

Under “major threats”, the NDF assessment quotes a study from Department of Zoology and Entomology at the University of Pretoria (Lindsey et al 2012a). “It is thought that they (captive lions) may serve as a buffer to potential threats to the wild population by being the primary source of hunting trophies and derived products.”

However, the issue doesn’t seem to be so black and white, as the same Lindsay et al study also recognises that “neither the limited market information nor the survey results represent sufficient data from which to draw firm conclusions about the relationships between the markets for wild and captive-bred lion hunting”. They conclude that “further research is urgently required into the issue of the trade of lion bones from South Africa to identify the potential risks and issues for lion conservation”.

Dr Kelly Marnewick, senior trade officer for the Endangered Wildlife Trust, raises concern that the NDF suggests there is “no evidence to suggest that the lion bone trade… is detrimental to South Africa’s wild lion population”.

Marnewick said: “While this may be true, the opposite is true too – there is no evidence to support that it does not have an impact.”

Section 10 on the Illegal off-take or trade states that “although there are no specific figures on the illegal trade of lions in South Africa, provincial conservation authorities indicated that the illegal use or trade of wild lion is generally small to negligible”.

However, if there are no figures, there is no scientific basis for such a statement. Do we have any idea of the size of illegal trade?

Professor John Donaldson, who chairs the South African Scientific Authority, said: “The NDF is not a general conservation document that deals with all issues relating to lion conservation.”

“The NDF has a specific purpose, to determine whether international trade has a negative impact on wild lion populations and to compile and assess evidence related to this risk.”

So the NDF assessment looks at one question only, namely: Will the export of lion trophies and bones be detrimental to the survival of the species in the wild?

“It compresses the complexity of preserving the natural functioning ecosystems into mere numbers… but numbers alone are a wholly inadequate measure of the health of the environment or its species,” said Chris Mercer, the director of the Campaign Against Canned Hunting.

By justifying the canned lion hunting and lion bone trade based only on the findings of the NDF assessment, the DEA ignores many wider concerns, such as the potential impact on wild lions in other parts of Africa and the welfare of about 7 000 lions in captivity awaiting the hunter’s bullet.

Dr Paul Funston, the senior director of Panthera’s lion and cheetah programmes, said: “I believe the South African government, in allowing these practices to continue legally, shows no regard for or understanding of how these practices might affect lions, and other large cats throughout the world.”

No consideration appears to have been given to the continued concerns of animal welfare standards in the captive lion breeding industry. Only last week the NSPCA Wildlife Protection Unit was conducting inspections in the Free State.

The DEA also seems to disregard the ethical debate underlying the canned lion industry and the damage this relatively small industry can do to the reputation of Brand SA, a multibillion-rand tourism industry.

“The only conclusion that can be drawn is that the South African Scientific Authority assessment is a political finding and not a scientific one, because it is trying to legitimise the existing captive lion industry,” said Michele Pickover, the director of the EMS Foundation.

The original article was published in the Mercury & Star Newspapers and can be read HERE. It was also featured in South African Country Life. 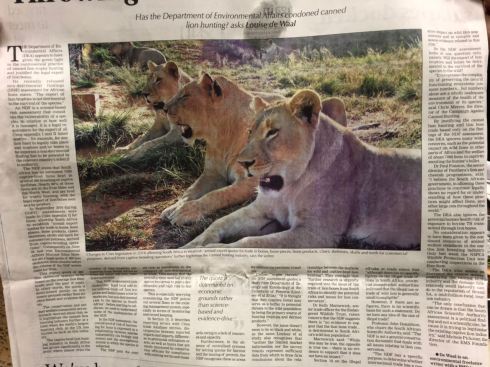