How often have you had the conversation with people about the awkwardness of township tours and their sense of voyeurism?

I have had this conversation too many times with friends, family and customers, but believe these township experiences to be essential. They not only enhance the understanding and acceptance between cultures, but also give a better and more personal appreciation of the legacy of Apartheid and of what is often considered as the underbelly of South Africa’s society. Township tours show the vibrancy of these areas, its friendly, warm, and engaging people, and its community full of optimism, creativity, and kindness. However, townships need to be heard, smelled, touched and not just seen from an air-conditioned bus. The tours also need to be a win-win for both the visitor and the township community. 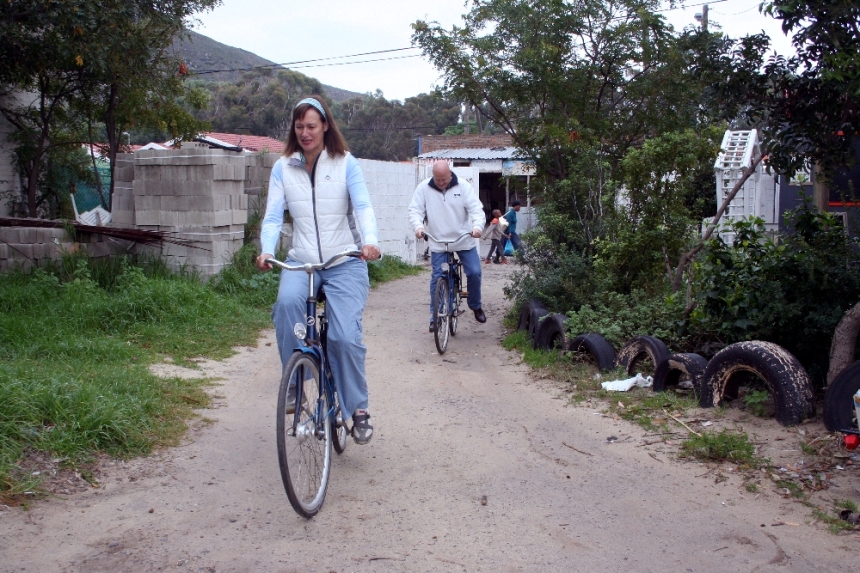 AWOL Tours hit the proverbial nail right on the head with their Masiphumelele township tour by bicycle. Their private tours are small (mostly 2-4 people), non-intrusive, offer plenty of opportunities for interaction, and generate clear economic benefits for its community. On top of all this, the mode of transport is fun and environmentally friendly. For each AWOL tour, fees are paid to local business owners and facilities visited, including the BEN Bicycle shop, Nongoloza and Nonni’s Restaurants, Sangomas or traditional healers, crafters & local artists, and local pre-schools. 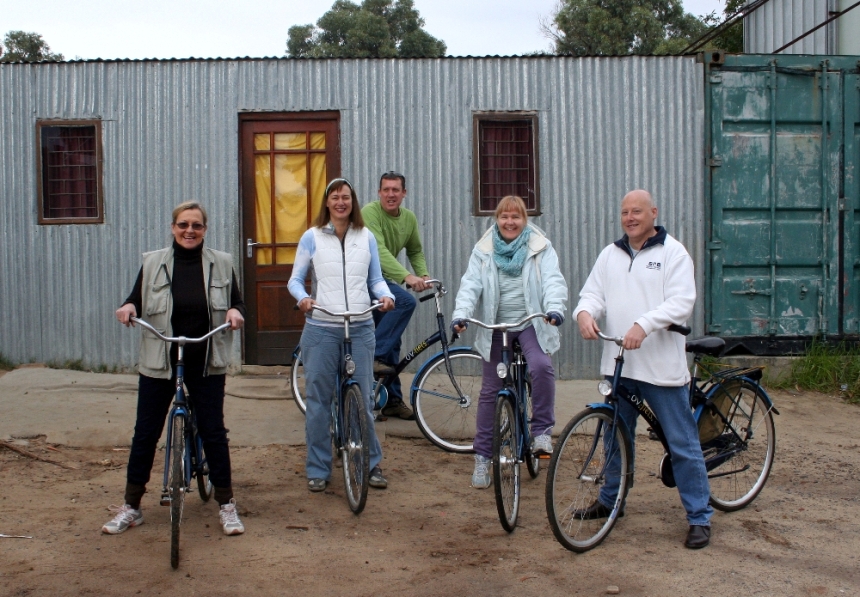 We were met by the AWOL bicycle guide, Zwai, with a beaming smile just outside the BEN bicycle shop. I grew up in Holland, so the old fashioned Dutch bicycles were a lovely surprise and I took to the back pedal breaks as a duck to water, unlike some of my friends.

Masiphumelele is a small township with an estimated population of 40,000 located in the centre of the Cape Peninsula. The vast majority of Masi’s population live in shacks with one shared water tap between at least six families and shared toilet facilities. Basic services and amenities, such as sewerage, electricity, roads (part surfaced), a primary and secondary school, and health clinic, are provided by the City of Cape Town. Unemployment is thought to be more than 60% and most people live from irregular and mostly informal jobs.

While adversity and hardship are part of daily township life, people are incredibly resourceful and achieve successes that many of us would not think possible under the circumstances.

We visited one of the many pre-schools that operate in the township, often from a house or shack. The teachers do amazing jobs in keeping the 65 or so children between the ages of a few months to 5 years entertained in two small buildings. They teach them basic skills and feed them breakfast and lunch in these cramped conditions. If it was not for these heroes, single mums would need to leave their child/children with extended family members or older siblings in order to go to work and earn a living. I have enormous respect for these women, who provide a safe environment for children and are paid very little or not at all for the vital jobs they do. 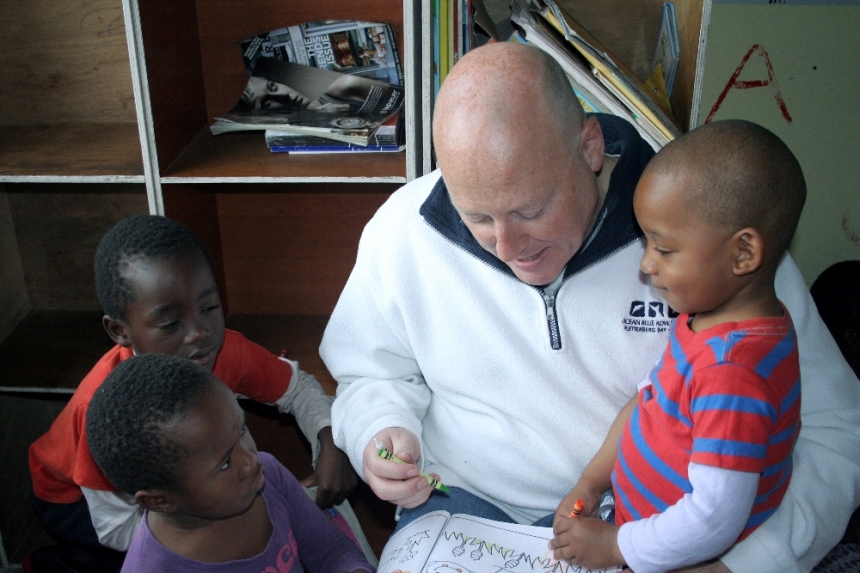 Sangoma’s or traditional healers play an integral role in African life and are often consulted in conjunction with Western trained doctors. Mayengese Evelyn Nomabhaso proudly shows us her Traditional Health Promoter’s Licence and her official red cape with beret. She patiently explains her beliefs and traditions, how she seeks advice and guidance from her ancestral spirits for her patients, and prescribes mostly herbal remedies. It is a fascinating experience, but one hard to completely comprehend with a scientifically trained mind. 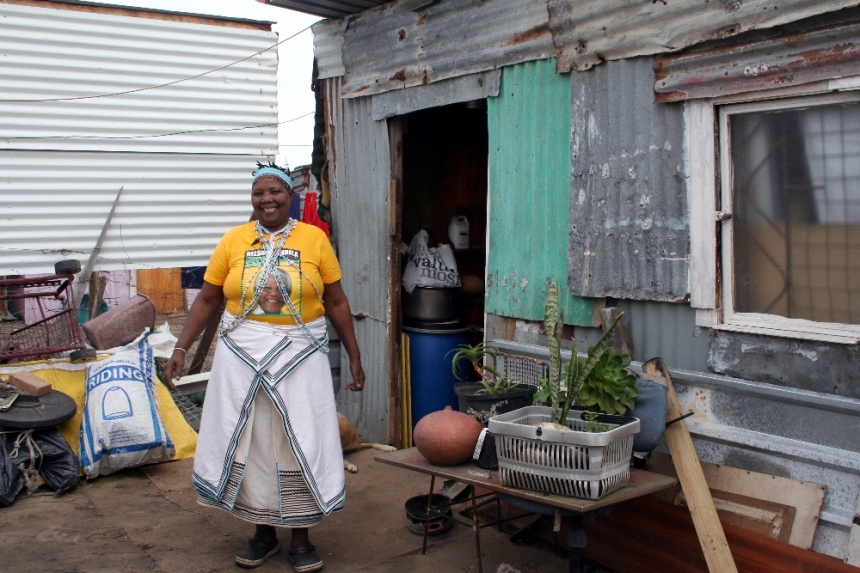 Our last stop was the real highlight for me, as I was not expecting to find an organisation like Deaf Hands @ Work (DHWSA) in Masi. Finding work is hard for most people, but finding work for people with disabilities is near impossible. Charles Nyakurwa grew up with his brother Peter, who has a hearing impairment. He now runs DHWSA, an organisation that empowers deaf people by providing training and creating employment. Peter now makes the most beautiful chandeliers from recycled glass. 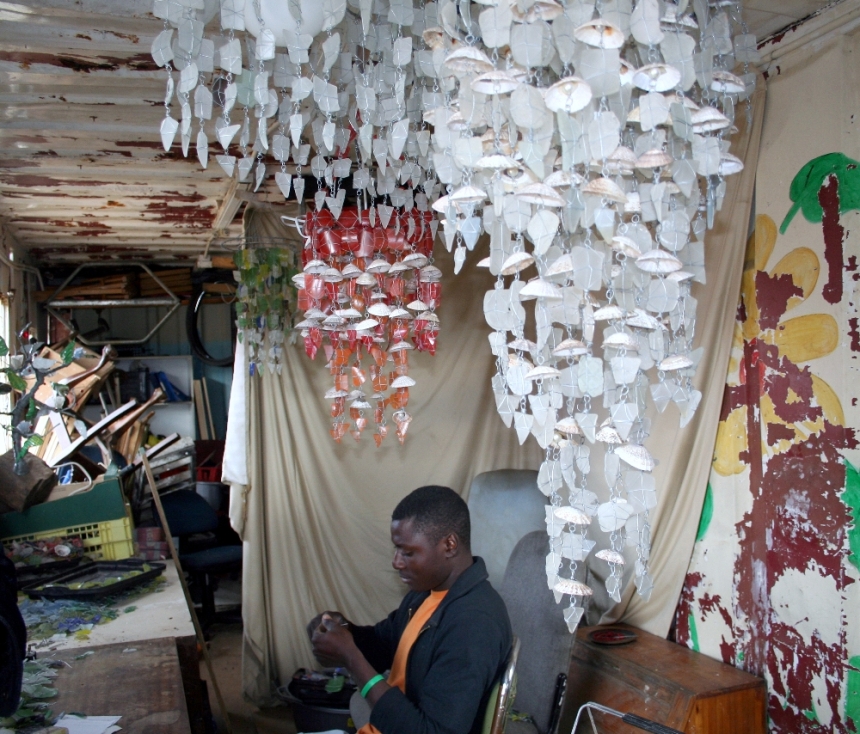 Our group were mostly people associated with Masicorp, an NGO that empowers the people of Masiphumelele through the promotion of education and entrepreneurship. All of us are very familiar with the township and its people and many have been involved in various Masicorp projects for many year, but every single one of us took away a whole new side of Masi and its beautiful and resourceful people. 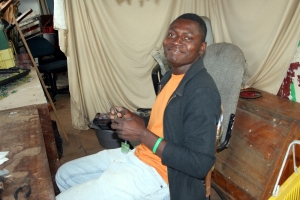