Cheetah Outreach: Does the End Justify the Means?

As I reported in a recent blog, the captive bred cheetah population is reaching epic proportions in South Africa with more than 600 cheetahs kept in about 80 facilities, like Cheetah Outreach, around the country and their conservation value is highly questionable.

Some of these captive facilities make genuine efforts to conserve the wild cheetah population with successful reintroduction programmes. Others support breeding programmes of Anatolian shepherd dogs, that are used to address human-wildlife conflict threatening predators like cheetah and leopard, by guarding livestock.

One of those organisations is Cheetah Outreach, who have supported such Anatolian shepherd dog projects for many years and as such gained respect within the industry.

It is for this reason that I was genuinely shocked when on a recent visit I found not only 12 adult cheetahs at their facility, but also two cheetah cubs and several serval, caracal, black-backed jackal, bat-eared foxes and meerkats. Only a few are rescued animals, most are bred in captivity and hand-reared specifically to become ambassador species.

According to most facilities, these ambassador animals perform an important “educational” role by raising awareness of the plight of the cheetah. Cheetah Outreach is no exception. They use these ambassadors for educational purposes and to raise funds for Anatolian shepherd dog breeding projects.

The global move away from hands-on wildlife interactions is finally gaining traction in South Africa with tourism organisations, such as South African Tourism and SATSA, taking a firm stance against such practices. Against this background and the fact that animals are sentient beings, can we condone the (ab-)use of ambassador species for human entertainment and to raise funds for a legitimate cause?

Cheetah Outreach has 12 male adult cheetahs, all captive bred in facilities such as Cango Wildlife Ranch and Ann van Dyk Cheetah Centre, and hand-reared. Eight are actively used as ambassadors that can be interacted with at their facility in Somerset West and hired for special on- and off-site functions, such as corporate events, fashion shoots, and weddings. 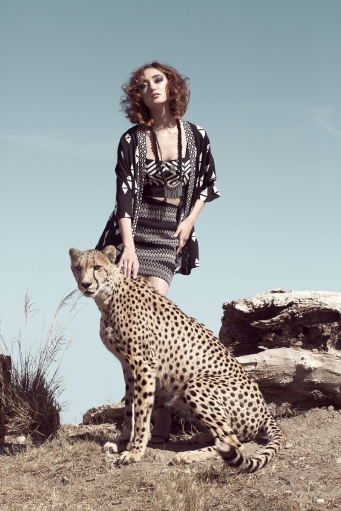 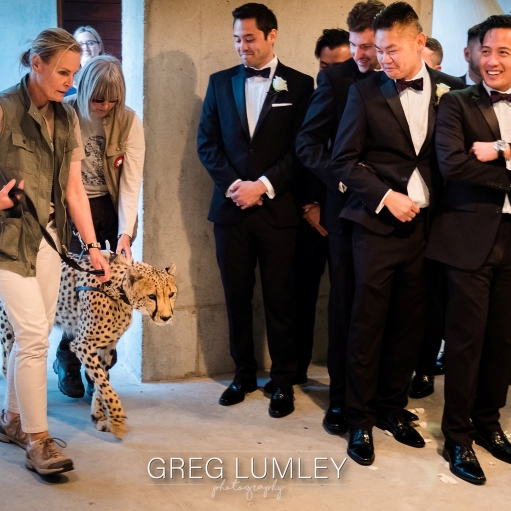 In addition, Cheetah Outreach offers cheetah cub petting – normally from September to March. Again, these cubs are not rescued orphans, as is often believed.

During my visit in December 2017, two five months old cubs were at the centre, both born in captivity and hand-reared. Daily interaction with the cubs of up to six hours a day (3 hrs in the morning and 3 hrs in the afternoon) is offered by the facility, at a cost of ZAR 250 per person.

During the peak summer holidays, people were queuing up for both the cub petting and adult cheetah interaction. Groups of up to six people were allowed in the cub enclosure and stayed on average for about 10 mins. Doing a rough calculation based on what we witnessed, an average of 180 people per day visit the cheetah cubs in peak season, generating ZAR 45,000 of revenue per day. 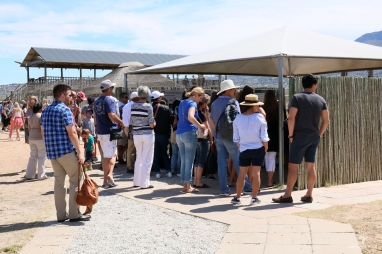 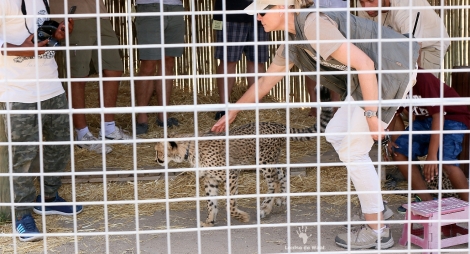 At the same time, about three adult cheetahs were also earning their keep, providing further income of ZAR 150 per adult and ZAR 90 per child for photo/selfie opportunities.

The facility is run with numerous local and international volunteers, hereby keeping their overheads to a minimum.

In the wider captive cheetah industry, once cubs outgrow the petting enclosure often at about nine months of age, they are either returned to the breeding farm, exported under CITES Appendix II for “zoological” reasons, or sold as pets to the Middle East. These guys will allegedly be heading for Sydney Zoo. Reintroduction into the wild is rarely attempted.

Cheetah Outreach – Does the End Justify the Means?

Although I would not want distract from the good Cheetah Outreach do in terms of education and raising funds for Anatolian dog breeding and livestock guarding projects, which are vital to the survival of the wild cheetah population, I do question the means by which these funds are raised.

I question the ethics of offering six hours of hands-on interaction with cheetah cubs per day. Cubs that are bred on demand.

Cubs that need to be worn out before going into the petting enclosure, according to this video posted on Facebook with the caption “Attempting to tire out these speedsters so they will sit still for their adoring public“.

As I already indicated in my post the Role of Ambassador Species in Wildlife Tourism, we need to ask some vital questions here and hold wildlife facilities like Cheetah Outreach accountable. 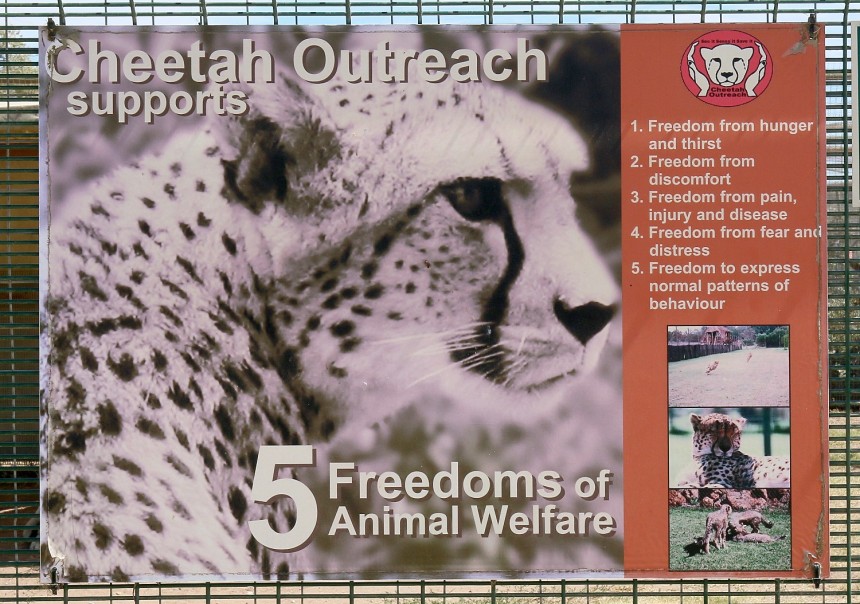 Cheetah Outreach, how can you proudly display the Five Freedoms of Animal Welfare, if so clearly you don’t meet the freedom to express normal/appropriate behaviour. Taking cubs away from their natural mothers, bottle feed them to be used for petting, and having adult cheetahs on leashes as photo props can hardly be classed as expressing a “normal pattern of behaviour”.

Cheetah Outreach, isn’t it time to go back to basics and rethink the means by which funds are raised for cheetah conservation projects, allow these ambassadors to live an as natural as possible life in captivity, and stop supporting the breeding farms? Breeding of big cats in captivity has no proven conservation value.

The #HandsOffOurWildlife movement and many others in our industry say it over and over again: hands-on wildlife interaction and cub petting has no place in our contemporary tourism industry. It is unethical and will damage Brand SA. 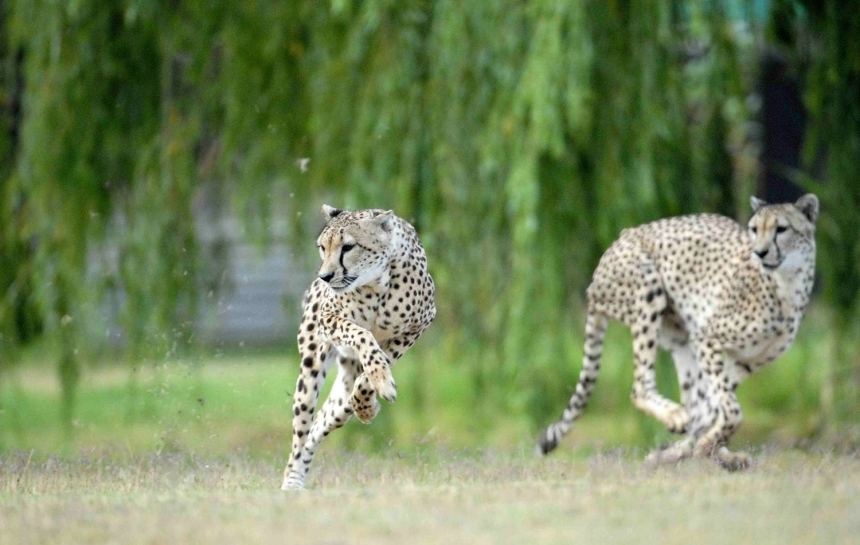 Cheetah Outreach has been asked for comments on the above, but have declined the opportunity.

So incredibly proud of this @bloodlionsofficial clip, giving HOPE to our captive lions and THANKS to our collective voices Watch the full clip here: https://www.facebook.com/BloodLionsOfficial/videos/3172170346342282/
Somebody decided last night that the sink was the coolest place to sleep and mummy ended up brushing her teeth in the kitchen 🤦‍♀️😻
Looking back on the year with the #bestnine2019 is always fun.
The #drought in parts of South Africa is horrific. This is the Nqweba dam in Graaff-Reinet with just a couple of puddles of water left. I feel for all the people who are desperately waiting for rain.
Such beautiful creatures these Mountain Zebras 🦓🦓
Four mega cute Francolins in our garden that I am trying to protect from my two kitties. These fluff balls are too much for their kitty instinct to ignore 🙀🙀
A few more Karlos and Ivana pics. They are just too cute and looking so happy. Read their story of sadness and of hope here: https://greengirlsinafrica.com/2019/10/29/a-heartbreaking-lion-story-with-a-happy-ending/
You know when two lion cubs have wriggled their way into your heart when you can't get enough watching them. These guys, Karlos and Ivana, are on a long road of recovery after their rescue by the NSPCA from deplorable conditions at Steinman's breeding farm in Lichtenberg. They have now found the best forever home they could wish for at Panthera Africa. So grateful to everybody who has played a role in their rescue and recovery.
One incredible sunset at @tierkloof_mountain_cottages
Meet Sasha the three-legged #cheetah at @lionsrock_sanctuary. Sasha was born in captivity and subsequently released into the wild, but had not learned many hunting skills. During a hunt he was kicked by his prey and broke his back leg in several places. The vet's only option was amputation, after which he could obviously not survive in the wild. He now enjoys the best captive life possible. It does show that captive bred cheetahs are ill-equipped for survival in the wild.